Have a visitor and wondering what to do for a day? Have time to drive? Then go to Morong. This is an alternative to the typical mundane mall-ing or couch-potato-ing and a fantastic way to make some discoveries. 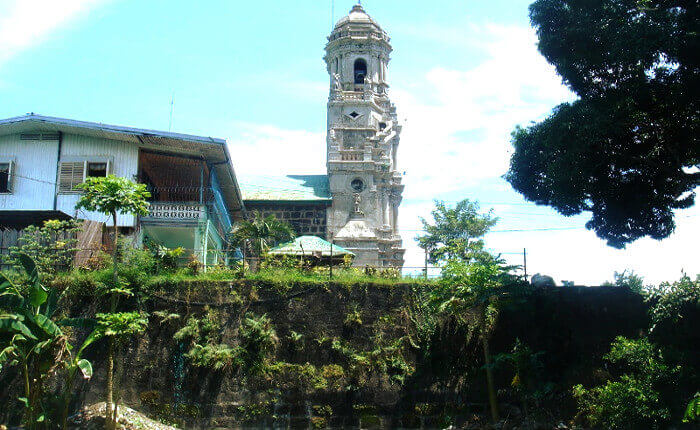 Head eastward down Ortigas Avenue. (Yes, you’ll have to bear a little bit of the Ortigas traffic all the way to Cainta. But you can leave the house early.) Before the road goes up to Antipolo, take the road to your right that leads to Angono. And just after the road passes Balaw-Balaw, on the left side of the highway, notice the beautiful bonsai at Angono Garden. A kilometer later, on your left, is the Vicente Manansala Shrine, and several kilometers more, after entering Binangonan, you will be in Morong. Make some short stops along the way. They will offer pleasant surprises.

Before reaching Morong, you will skirt a mountain by the bay. The road zigzags and gradually slopes down a verdant rice field that leads to the lake and down to the town’s main road. Yonder is the majestic view of Morong Church lording the horizon of green rice fields and the blue bay. On a pleasant day, you should not miss this view. It is lovely!

Check out the side road that leads to the church. You might miss the road as it is now hidden by the sprawl of sari-sari store and pedicabs. I saw early 1900s pictures of Morong showing the majestic location of the church lording over a beautiful hill without the present eyesores. It is located on top of a hill overlooking a pristine river, as most old churches are constructed near the river. Why? Because they have to convey the building materials like stones and logs using the river. With that thought alone, you will marvel at this great artistic feat!

Morong was a mission founded by the Franciscans in 1586. The San Geronimo church, as it is also called, took years to construct. Built in 1615 by Chinese craftsmen, the church is guarded at the entrance by two Chinese stone lions just like the ones in San Agustin Church.

The first church of Morong, which was made of light materials, succumbed to a fire that razed the town in 1612. Still smarting from the tragedy, the people built a new church of mortar and stone in 1615, at the present site in an elevated ground on the opposite bank of the river, with Chinese masons laying the church’s foundation.

From 1850-1852, the church was extensively renovated. The Franciscan chronicler, Fray Felix Huerta, reports that an indio master builder, Bartolome Palatino, a native of Paete, was commissioned by Fray Maximo Rico to renovate the facade and build a bell tower.

Probably constrained by the lack of space at the church facade, he could not build a separate bell tower as common church structure dictates. Because of frequent earthquakes, bell towers were built separately from the church nave. Palatino decided to integrate the bell tower with the facade and in doing so he has to dig deep for the foundation to avoid the disaster caused by massive earthquakes that are so common in the Philippines.

In his unique design, he integrated the bell tower with the central pediment. This resulted in a tightly organized mass, and a well conceived architectural piece unique in the Philippines.

The beautiful facade is pulled upwards by a concentration of apertures and paired pillars heightened by pe-destals on the central partition. It features an additional story of an octagonal bell tower that adds to its height and drama. The octagonal belfry on top of the three-tiered frontage heightens the vertical sweep. Fine scrolls and floral motifs symmetrically decorate calculated areas.

Winged angels top its finials. Their stylistic influence is evident through out: the porcelain flower designs on the tower, saints with Buddha-like necks, and the dragon heads carved on the support of the choir loft. There also used to be two lions guarding the entrance; these are now kept inside the church.

This Mexican-Baroque facade, interpreted by a Filipino artisan, was restored in 1962 under the direction of the architect Carlos de Silva who covered the facade with a layer of cement. The interior was similarly restored, and it houses significant features, like paintings and reliefs.

The flowering of colonial church architecture was a significant event in the history of the Philippines. Geographic location, climate, materials, and the spontaneous and improvisational attitude of the Filipinos created a kind of architecture that was unique from Western architectural idioms. The result may not be correct from a Western’s point of view, but the Filipino styles are correct in our own setting. The churches hardly impersonate European or Mexican models; instead, they seem to charm each other.


A Gathering of Artisans

The Galleon Trade between Manila and Acapulco was a very slow journey. The ship took about a year to reach its destination. Thus, new ideas and trends in the Philippines always lagged behind from the other South American colonies. While this situation did not allow too much artistic leeway for the friars in their designs, the local artisans had ample time to develop their newly acquired skills. In time, the artisans began infusing their individualistic and often indigenous styles into the architecture. Although it was done with innocuous intentions, the rules of western traditional architecture were freely deviated.

The local artisans were a varied mix of people. When building a church, the Filipinos contributed much of the needed labor force. They were good builders of wood and bamboo, but they were unskilled in building with stone. Hence, Chinese laborers were hired when such a specific skill was required

The gathering of artisans with different ethnic backgrounds plus the fact that Filipinos have a strong Malay heritage, eventually led to the infusion of non-western motifs into the architecture, further creating a distinct style. The facade of the Morong church is an interesting example of how a western idea was transformed to suit the taste of the local artisans.

The church builders had to learn to build with what was available. In general, the early missionaries had very limited resources, in terms of financing as well as materials. This was further aggravated by the fact that they had to learn to build churches that are durable enough to survive the natural calamities so prevalent in the Philippines. These conditions led to many Filipino improvisations.

Our colonial church architecture is distinctly Filipino because it reflects a mixture and accretion of different architectural styles. It was never a question of whether the builders should tear down an old church to make way for a new one. That would have been very wasteful, considering the limited resources they had. When churches were rebuilt, they were often reconstructed over existing foundations or walls. As a result, the architectural style is usually a crossbreed of disparate sources. The Morong church, however, displays how the integration of a new belfry with the old facade can create one of the most well composed architectures in colonial Philippines.

Put together, geographic location, climate, materials, and the spontaneous and improvisational attitude of the Filipinos created a kind of architecture that give hint to western ideas yet are unique enough to stand on its own. Traditional western architectural idioms were interpreted in ways that are suitable only to the Filipino taste. Through this process, exceptional churches like Morong abound in the Philippines. Colonial churches have been a great source of inspiration for a long time.

Do not fail to see the 14 Stations of the Cross. See them one by one. It is like seeing several museum pieces revealing the raw sensibilities of a Filipino artist. Painters and artists have often recreated the faith for us and helped us see our faith from our native soul. They provide us a raw vision of how we see the miracles of the faith. The native painter has indigenized the passion of Christ in a way that attracts strong emotions only a Filipino could fully comprehend. Together with the poetic prayers and lyrics of hymns, the paintings have enlivened the church as they breathe its soul. Besides its role as bastions of the Catholic faith, Morong is poised as a living monument and a proud standing witness to our Filipino heritage.

You might enjoy the details of the church and it might take you the whole day. After appreciating the great woodwork on the altar retablo, visit some quaint stores. You might discover some sweet delicacy. Some local panaderia bakes some native fare. Nothing fancy. Just simple foods like pan de sal and pan de limon. Some small stores offer minandal or snack such as biko, suman, or bibingka. Ginatan, a sweet soup of yams and coconut milk, which they also call higute is also served. Try a small carinderia and dinner is complete with tinolang manok. It might offer a pleasant surprise as well.