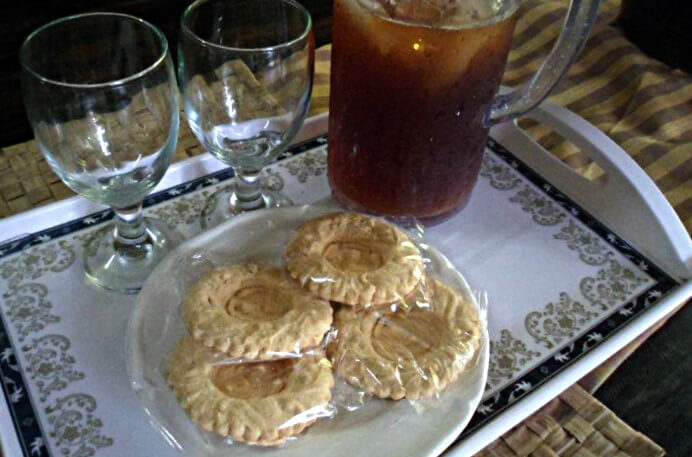 Panecillos de San Nicolas, also known as putu saniculas or simply saniculas to the Kapampangan, is one of the heirloom recipes learned by some of the older families in Pampanga from the Augustinian friars during the Spanish era. Actually, these panecillos or little pan, are not classified as bread, but rather as biscocho or biscuits. These biscuits have the characteristic image of San Nicolas de Tolentino, also called Apung Kulas, embossed on its flat round surface. San Nicolas is one of the important saints of the Augustinian religious Order and is the designated patron of one of the oldest established pueblos in the Philippines, the town of Macabebe in the province of Pampanga.

For Catholic Kapampangan, saniculas is not just an ordinary biscuit. It is usually blessed by the priests, and as such, some believe that it is an effective treatment of pain as well as pampaswerte or lucky charm. The biscuit becomes a festive delicacy during the feast day of Apung Kulas every 10th of September. In Macabebe, thousands of pieces of saniculas are distributed to the worshipers. There are some who immediately eat the biscuits after the mass, while some put them in their bags as pampaswerte or otherwise they display them in their altars at home.

In earlier days, with some powerful orations and incantations, farmers used them as magical fertilizer in farmlands so that their harvest will be plentiful. They crushed saniculas into powder and sprayed them to the ground like good-luck fertilizer.

Although the panecillo has a long tradition of cooking in Europe, the colonial Filipinos revised and adopted its saniculas recipe by using the native ingredients available in their immediate locality. They use the white flour they gather from the root of the arrowroot plant (Maranta arundinacea L.) they call araro, oraro, or uraro. They mix the flour with coconut milk, sugar, and butter.

They also shape and embossed design on the flat surface of the biscuit by pressing them on hulma / moldi or molds of carved hardwood. They change the design and size of saniculas depending on the form of molding work. In older homes, one can still find old moldi of saniculas which are displayed in antique lansena or sideboards and also in the altar with the image of the Lord or devotional saints. The most common shape is biluhaba or oblong that tapers at the upper end seemingly like a leaf.

Until now they are still preparing saniculas in Mexico, Guagua, and San Fernando, although previously they were not making it in the town of Arayat and Angeles City. According to the elders and experts, by just looking at the design of saniculas, they can tell from what town it came from and what family baked it.

Among the famous Kapampangan food experts who continue to cook saniculas is Atching Lilian Lising-Borromeo of Parian, Mexico, Pampanga. She frequently teaches cooking saniculas to anyone who wants to learn it. Her antique wooden molds of various designs are delicate heirloom pieces especially commissioned works for her ancestors by wood engravers of Betis in Guagua, Pampanga.