Palm Sunday in the Philippines is most dramatic. To commemorate the entry of Jesus Christ into Jerusalem, Filipino Catholics bring their palaspas or decorated palm fronds to church to be blessed by the priests. It is always a sight to behold when young fresh coconut leaves called ibus are transformed into intricate forms and shapes. Children hold them liked priced possessions. It is one great spectacle to see the brimming Sunday congregation eagerly wave their palms as the priest passes by to bless them. The event is simply joyful. 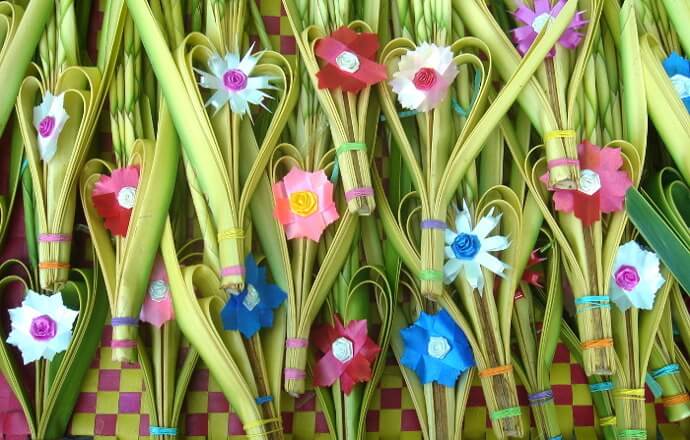 Domingo de Ramos or Palm Sunday is one of the most photographed events in the Philippines. Palaspas, which is the most intricate, provides an exciting opening act for the drama of Semana Santa. The sight and smell of fresh palm fronds herald Holy Week in the Philippines.

More than this characteristic religiosity, the palaspas showcases the Pinoy’s inherent artistry and creativity. His dexterity is amazing, as to how he could transform the fresh fronds of coconut or buri palms into plaited and decorative patterns and empower it with new meaning. His propensity for bright colors and profuse embellishment is put into maximum use as the palaspas is decorated with crepe paper flowers and banderitas. But no matter how intricate the palaspas is, it has basically just two parts: a decorative handle and the decorated fronds.

The decorative handle may be heart-shaped or woven like a mat or folded into overlapping bows. On the other hand, the fronds are from which hang the woven stars, grasshoppers, and other figures from palm leaves or other tiny paper flags. The fronds are cut and woven to enhance various textures and designs. The fronds may be cut or folded or may be plaited to form zigzag patterns called kidlat (lighting ), espada (sword), bola (ball), ibon (bird), hipon (shrimp), and other designs similar to those found in Bali Indonesia.

The galilea, an elevated platform decorated with palm leaves and flowers, is built in the church patio for the choir who will sing the chants of the day. Tuklong or temporary altars decorated with palaspas are where the little angles sing their Hosannas at the top of their voices.

Once blessed by the passing priest, the palaspas acquires potency that even the Church has no official stand whether to accept, denounce or ignore this folk belief. The blessed palaspas becomes a fixture on top of the doors and windowsills to ward off any evil that would ever pass the household. Even the finest houses in Forbes Park or the humblest barong-barong in Tondo will have the blessed dried palaspas for a year.

My interest in palaspas started with a palm leaf ball my father made me when I was four. I was so fascinated by how he was able to create a toy out of two green coconut leaves. He made it with such dexterity that I was really captivated. For me, it was almost like magic!

He created the ball within a very short time that I marveled at the creation itself. Like any other curious child, I wanted to learn how to do it myself. I discovered later that a lot of other things could be created out of these palm fronds.

Together with my childhood playmates in Pateros, we would get our palms from the four young coconut trees in the open lot in front of our house. All those trees are now gone and are replaced by tall buildings. But my palaspas fascination remains.

I discovered later that this fascination is something I share with other people. In fact, the children I met in Baras, Rizal can make a bird figure as easy as they make friends. I have learned from my summer playmates in Angono that a lovely grasshopper could emerge out of repeating folds of these supple leaves.

I was surprised when I saw in Roxas City in Capiz a big Christmas lantern made entirely of palaspas. I never thought that such an object ever existed. It was pure ingenuity and an artistic creation. It was also a labor of love as the parol was made of so many intricate folds of the palm leaves.

For most of us, the mere mention of palaspas would denote specifically the decorative fresh coconuts fronds used during Palm Sunday.

However, the term could mean all the plaited objects that are made out of palm leaves. These objects could be used mainly for play, to amuse, to decorate, to ornament an offering for a religious function or serve some utilitarian purpose as food wrapper or food cover.

Palaspas is created for specific functions and for specific occasions. And it lasts for as long as its purpose is being served. A great part of its beauty and function is in its freshness. Once dried, much is lost. Its beauty is indeed ephemeral. Its function, temporary. Enjoy it while it lasts.

The images of the palaspas expressed in the palm fronds reflect simple everyday objects, just like the material itself, which is a basic element in Philippine life. This is an art form generated by the people, with no single creator to claim credit for its beauty. Its simplicity as well as its inherent intricacy make palaspas very attractive.

But one is tempted to say that the beauty of the art form is somehow inherent in the material itself. The long and pliable fresh palm leaves are so beautiful that one is attracted to weave something out of them. The leaves even smell luscious that simple rice cakes wrapped in ibus leaves taste better as they smell sweeter. The craft seems to have a life of its own, born out of the sheer charm of the natural material from which it is created.

In stray moments, during a sudden rainstorm perhaps, it is not unusual to see a group of children gathered together exchanging their palaspas creations of birds and stars and teaching each other how to make the forms. Young people are always attracted by the dexterity of the older ones in making the palaspas. There is no limit as to what our imagination can make out of these leaves. Filipinos have used palm leaves much earlier than recorded history.

Fray Juan De Plasencia noted in 1589 that when the early Filipinos wish to celebrate a festival, which they called pandot or worship, they celebrate it in the large house of the chief by constructing a temporary shed, which they call sibi. He also observed that "on the posts of the house they set small lamps, called sorihile; in the center of the house they place one large lamp, adorned with leaves of the white palm, wrought into many designs. Plasencia is obviously describing the palaspas.

Palaspas brings our obsolescent past here and now. It is a part of our primal belief system that has been retained and redefined in our newfound faith. The detail of the façade’s pediment of the Miagao Church in Iloilo contains a central motif of a coconut tree, as if indeed it is the "tree of life" to which St. Christopher who is carrying the Child Jesus on his shoulder is clinging onto.

According to an old Philippine legend, the coconut tree was the only bequest left by a loving mother to her two children, a tree which sustained them for life. The coconut has been so much part of the Philippine landscape that it is almost taken for granted.

Aside from these ceremonial and religious purposes, the palm leaves serve everyday utilitarian uses. Looking for pre-Hispanic Filipinos, William Henry Scott while reading old manuscripts noted that the 16th century Visayan rice cakes are "boiled in a little wrapper of coconut leaves and called puso after the banana flower.

He noted the intricacy of the culture as they "were prepared in a number of different sizes and shapes e.g., linalaki (masculine); binuwaya (crocodile-like); or kumul sin datu (datu’s fistful). There are different variations of these boiled rice containers: kinasing is shaped like a heart; binaki is flat like a frog at rest; and tinigib has one flattened corner like a chisel. In Dumaguete, there are all called by their recent appendage: "hanging rice."

Furthermore, while meticulously studying the Noceda-Sanlucar Tagalog Dictionary, Scott noted the relation of the palaspas culture with the technology of planting and harvesting of rice. He writes, "Once (the rice) plants began to bear heads, placed in the fields were scarecrows, wickerwork or palm-leaf pendants kept moving by the wind, in a variety of different shapespamanay, balian, palawit, salidangdang, bankiyaw, and pakanlog.

Says an old Filipino proverb: "He who plants a coconut tree plants vessels and clothing, food and drink, a habitation for himself and a heritage for his children."

Folk medicine prescribes coconut oil, preferably made on Good Friday, as a cure for gas pains, skin diseases, and for anointing the sick. Powder from burnt coconut shell and blessed palaspas is used by the herb doctors to cure toothaches and tropical ulcers. Coconuts are used in divination; young nuts buried under the house ensures a cooler dwelling; fronds blessed on Palm Sunday protect the home against lintek or lightning and other evil spirits.

It is a community effort during fiestas that arcos, or decorated arches of bamboo and palm, are erected at strategic points where the procession of the patron saint will pass. They also construct a temporary kubol of palm leaves where the lua or the poem of praise will be declaimed for the patron saint. The makeshift stage on which the play or the variety show is to be performed is also decorated with curled palaspas.

Some folk artists have experimented on the expressive possibilities of the leaf, thus adding popular expression to the repertoire of the professional artist. The plaiting and interlacing are often complicated and refined to match the fresh fronds. The midrib sometimes remain dominant as in nature, yet elaborated with plaiting, while the outer shape of the leaf becomes pure fancy. Each frond is an individual variation on a theme. The familiar leaf is re-shaped while retaining a sense of the original natural form.

Removing whatever religious value on palaspas, some of them end up as accent pieces to decorate a household. They never fail to become conversation pieces especially if the palaspas is intricate and most unusual.

It would also be interesting to understand the mathematics of the designs, to know whatever mathematical formula would allow a certain design possible while another configuration unworkable. Perhaps this might be a good tool to t each visualization in mathematics.

Palaspas also consoles. It shows us the ephemeral as it reveals its beauty in a fleeting moment. Exactly like life itself. As the Catholic priests burn the palaspas to ashes on Ash Wednesday, 40 days before Palm Sunday, the palaspas reminds us of our evanescent humanity with a cross from its soot marked on our foreheads.