Sisig was one of the first Kapampangan words explained to Spanish missionaries by the Augustinian priest, Fray Alvaro de Benavente. He published it in his book, "Arte de Lengua Pampanga" in 1699. He referred to "sisig" as a manner of preparing food as in "guisar con vinagre, v.t. ensalada" or simply, to cook with vinegar, or make a salad. 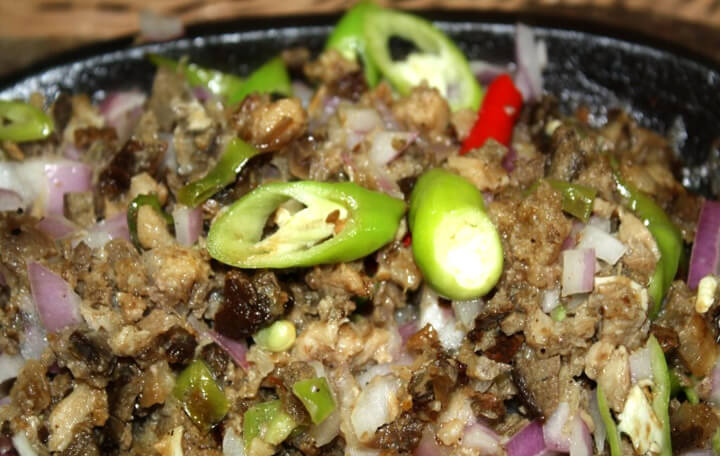 Sisig was also defined by another Augustinian priest, Fray Diego Bergaño, in his Bocabulario de Pampango en Romance, y Diccionario de Romance en Pampango published in 1732. Although he spelled it is "sising" which is unlike the "sisig" of Fray Benavente, they both have compatible definitions.

Fray Bergaño defined "sising" as a salad, including green papaya or green guava sprinkled with salt, pepper, garlic and vinegar. However, "sising" might have been just a printing error, as sisig is reflected in its derivatives such as "manisig" that means to make the salad and in "mapanisig" or someone who loves making salad, or who eats it often."

Another definition given by Bergaño to sisig is "chara" or achara, which has another Kapampangan word equivalent, which is "daloc" that is to marinate in salt, vinegar and pepper. In today's Kapampangan, the term "manyisig katang mangga" means "we eat mango" by pagbubudbod and pagdidildil with salt, toyomansi, or fish sauce the crunchy slices of green mango.

Therefore, the sisig known to the ancient Kapampangan, is the achara or mixed salad greens without meat or otherwise sour green raw fruits or vegetables that were soaked and marinated in vinegar with garlic, salt and pepper. This is specially prepared for pregnant women who are feeling nauseated. 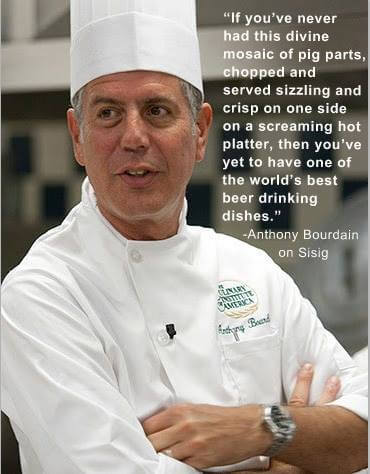 Over time, the sisig has changed in form, substance and preparation. From being a side dish like the cold achara dip or plainly salad, it is now the smoking hot main dish featured on the dining table. It is now prepared mainly from meat like boiled pig ears and cheeks finely chopped and then mixed with chicken liver and brain of pork and onion, salt, and pepper. Regardless, it also has the souring agent or pampaasim because calamansi juice not only provides delicious panlansa but more importantly, it has this refreshing fragrance that whets the appetite. Unlike before that it was prepared for pregnant women, now it is served mainly for drinking men, as a form of their favorite pulutan, in many beer gardens or roadside ihaw-ihawan.

In the late 1970s, Aling Lucing Cunanan of Angeles City caused major changes in the preparation and serving of sisig. She completely gave a new meaning to the word that Fray Benavente and Fray Bergaño will no longer comprehend. First, she charcoal roasted (nangnang) the pig parts like ears and cheeks after boiling them carefully. Using two heavy cleavers, chopping (tadtaran) with fresh onion and red hot chili comes over later and then served piping hot (iderang) on a sizzling hot plate. Hissing and steaming still, it is served hot and allows the customers to make their pangsangkap according to their preference for chili, calamansi, suka, toyo and patis. 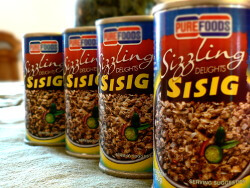 Aling Lucing retained all the elements of sisig but her use of the hot plate resulted in major changes in the traditional sisig that attracted the attention of the whole nation. At present, the sizzling sisig is not only available in the small sisigan of Aling Lucing along the abandoned railroad in Angeles City. It can also be found as an everyday street food in many towns like Pateros. It is also sold in various interpretations and spin offs - there seems like bopis sisig with taba and chicharon. There is also chicken sisig and sisig bangus with mayonnaise. There is also tokwa sisig, vegetarian sisig, and sisig pizza. It is available on-line. Sisig is also canned and packed in ready-to-cook sachets and exported abroad, and served in burrito buns in San Francisco, California.

Sisig continues to be defined and redefined. It has gone a long way since Fray Benavente defined it for his compatriots in 1699. 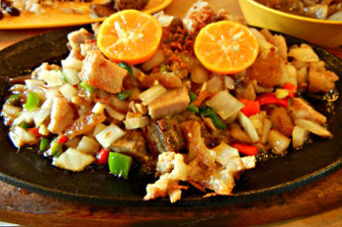 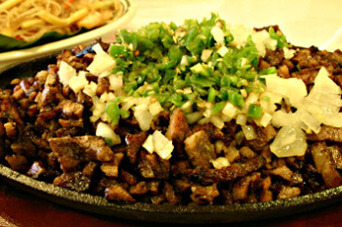 "If you've never had this divine mosaic of pig parts, chopped and served sizzling and crisp on one side on a screaming hot platter, then you've yet to have one of the world's best beer drinking dishes." -- Anthony Bourdain