Flores de Mayo (Flowers of May)


The Queen of Filipino Festivities

May is probably one of the most beautiful months in the Philippines. It is when Flores de Mayo (Flowers of May) is celebrated by many Filipino communities from Luzon to Mindanao. Flores de Mayo, not to be confused with Santacruzan, is a celebration in honor of the Blessed Virgin Mary. 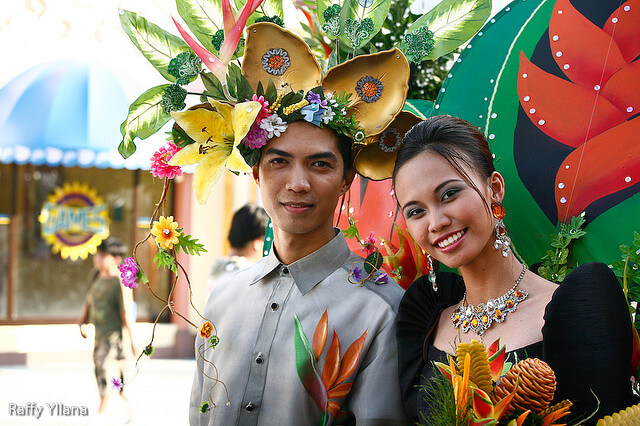 The Flowers of May

To commemorate the life of the Blessed Virgin, devotional prayers are offered in Catholic churches all over the country. Children and young adults march down the aisle of the chapel carrying cut flowers and petals in native woven baskets toward the altar as a form of offering to the birth giver of Jesus Christ. Novena prayers are recited prior to the offering of flowers and hymns and praises to the Blessed Virgin are sung throughout the procession. The novena prayers last for nine days.

Flores de Mayo is considered as the Queen of all Filipino festivities. Santacruzan, a traditional biblical reenactment of the search for the holy cross of Christ, serves as the culmination. It is held on the last day of the novena prayers.

According to the legend, 300 years after the death of Christ, a 75-year old Queen Helena of Constantinople set forth to find the Redeemer's cross in Jerusalem. After some diggings at the site of Crucifixion, three crosses were found. To find out which one is the real cross, Queen Helena asked one of her ill servants to lie down on each cross. They solved the mystery when the servant was miraculously healed after touching one of the three crosses they found, which they believed is the same cross where Jesus died.

In honor of St. Helena, today, Santacruzan is known for its grandiose, glamour and opulence. Beautiful ladies in embellished gowns and ornate floats are joined by their consorts in a procession that is meant to commemorate the search and discovery of the Holy Cross. Biblical personifications are represented in the procession, including the most coveted Reyna Elena (Queen Helena) who carries a crucifix in her arms and escorted by a younger boy who represents her son Constantine.

Santacruzan (also called 'Sagala') is the highlight of Flores de Mayo. Although the procession is slowly becoming more like pageant, many Filipinos are striving to maintain the sacredness of the procession by following the traditions of their predecessors.

Despite the regalia and fineries, the Blessed Virgin Mary will forever remain the true Queen as her image always occupies the final spot surrounded by a choir singing "Dios Te Salve" (Hail Mary) until the end of the procession.

Religious in nature, Filipino immigrants in the United States and Europe maintained the tradition. This shows how deeply rooted Filipinos are to their native culture.