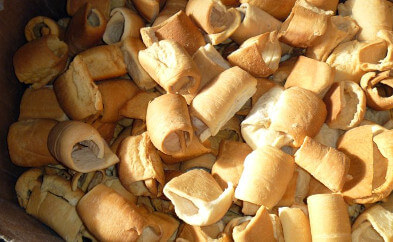 There are two types of biscocho in Pasuquin, Ilocos Norte. When buying, you have to specify whether you want the "hard biscocho" (which is redundant), or the "soft biscocho" (which is a contradiction in terms). But whatever the case may be, both provide distinct victual delights.

Unlike most biscocho which are made from leftover bread, Pasuquin biscocho is made using freshly baked buns, with the final product being either a fresh soft bun (like Spanish rolls), or a crunchy toast (like mamon tostado). The once-baked "raw" biscocho is a soft and fluffy roll while the twice-baked hard biscocho is a crunchy golden toast.

While Dumaguete's bizcocho de cana is made from flat bread slices, the Ilocano version is rolled. Unlike Barugo's biscocho de rosca, it is neither oily with butter nor sweetened with a dusting of sugar. Pasuquin biscocho crackles like crunchy chicharon. It's flavored with anis using its liqueur anisado, the same tangy taste in green absinthe or some sweet rice cakes like kochang. A hint of saltiness, rather than sweetness, adds a pleasant counterpoint.

Writing from Cebu in 1568, Miguel Lopez de Legazpi complained to the Spanish King Don Felipe that, "we were in great need of food, as we had on board the fleet nothing but biscuits." That was the bizcocho brought from Spain to the Philippines.

Spanish bizcocho, however, is different from the Filipino biscocho. The Ilocano intellectual, Isabelo de los Reyes (1864-1938), clarifies "Those that are called bollos in Spain are the pastries, which in the Philippines are called sopas. Those that we call broas are the bizcochos in Spain. The hard biscochos duros in the Philippines do not exist in Spain, though they toast bread in the pan, which is not sweet." 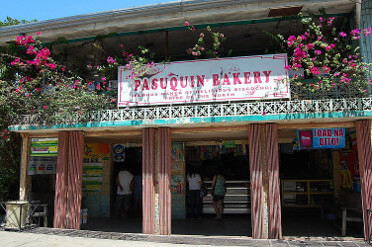 Through the years, the Filipinos have learned to love their biscocho. On the way to Pagudpud, a seventeen-kilometer drive north of Laoag City, is the biscochohan in Pasuquin that has been making biscocho using the same basic recipe since the 1940s. Their product, to quote a fan, has become "an edible landmark" of the province of Ilocos Norte. 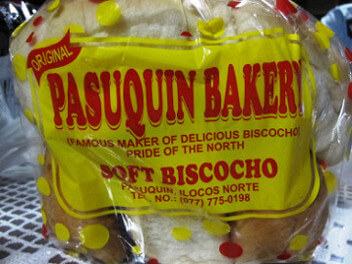 Part of the local legend is that the recipe was made by a certain Timot Josue, who was trained in a Spanish panaderia in colonial Manila. Bringing home his baking skills to Pasuquin, his able assistants, Sixto and Panyang Salmon, deduced both the process and the ingredients through careful observation and practice.


Sixto later served as a baker for the American army stationed in a camp along Victory Road, south of Pasuquin. Out of his meager earnings, he converted a humble camarin (granary) into a bakery and built a brick yurno (oven) almost single-handedly. His only child, Manang Pansing, now manages the bakery and remembers how her father prepares agmasang (dough) late at night, bakes agyurno (bread) early in the morning, and the agipisok (toast) of the biscocho by mid-day. He gathers ipil-ipil firewood from the Burgos Mountain and avoids those that may impart unpleasant odors and flavors to the bread. He procures anis from the farmers in Batac and Piddig to make sure that he bakes and toasts the best biscocho.

SOFT BISCOCHO
Soft biscocho is a contradiction in terms. But whoever thought that all biscocho are hard obviously has not tasted Pasuquin biscocho. The joy of the soft version is its freshness. The fluffy white buns form soft layers of chewy roll with just the slightest hint of anise. 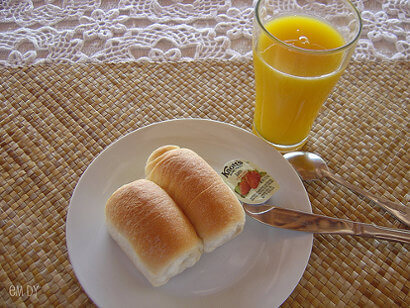 You can eat it plain or take it to another level by serving it hot with a choice of palaman or spreads like tuna, sardines, and Vigan longganisa. Other Ilocanos eat it with paksiw na baraniti (round scad) simmered in native onions and tomatoes. Others enjoy it with poki-poki (grilled eggplant omelet), and adobong sili (braised green chili) with saluyot as its perfect counterpoint.

HARD BISCOCHO
The toasted biscocho maintains its aglukot, or rolled shape and has two distinct portions. The ukis is the crisp outer rind of the bread, while the bugas is the light and soft lump that remains. 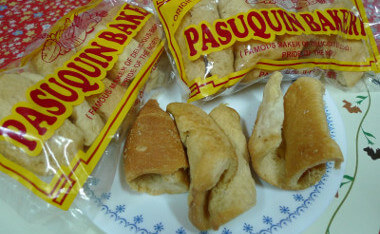 Just as Fray Lorenzo Fernandez Cosgaya (1661-1731) noted in his Diccionario Pangasinan-Espanol, the best way to eat biscocho is to "saosau." This means to dip into something like a beverage-hot chocolate, milk or coffee. Its texture and flavor are enhanced when we sawsaw. I have enjoyed it tremendously with a special dip called kinalti, which Ilocanos prepare by boiling panucha (molded raw unrefined sugar) with coconut milk.


With these victual delights, I would not be redundant in saying that I enjoy the hard biscocho nor would I be contradictory because I like the soft biscocho, as well. All I know is that I am very willing to make the long 500-kilometer drive from Manila to Pasuquin just to enjoy them again.

This essay was a finalist and cited as Honorable Mention by the judges in the 20O9 Doreen Gamboa Fernandez Food Writing Award Competition.