Pagtitinapa is one of the major seafood industries in the Philippines especially in the Province of Bataan. They have perfected the art and craft of tinapa as a way of prolonging the self-life as well as enhancing the flavor by smoking the various kinds of fish they catch along their provincial shoreline. 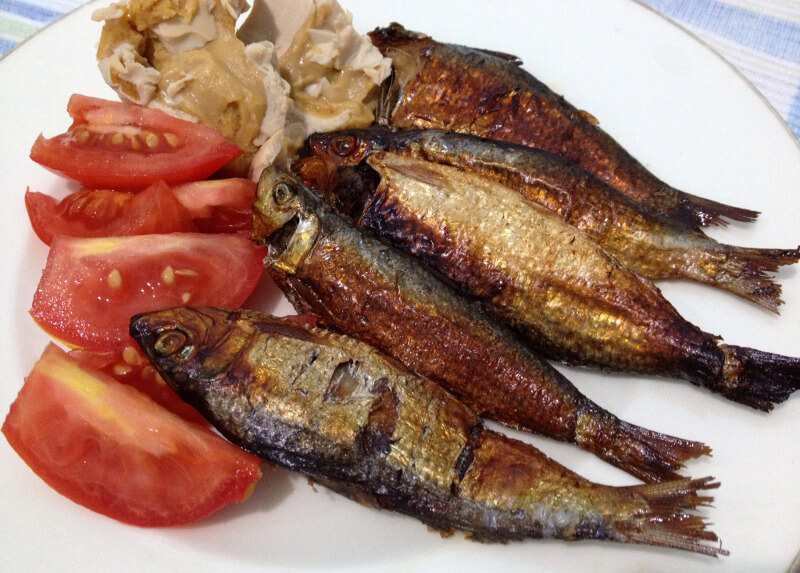 Being a peninsula, almost all towns of Bataan are either facing Manila Bay or the West Philippine Sea. They have access to fresh seafood as well as precious salt. In the markets of Orion and the capital city of Balanga, one may find a bountiful variety of fresh smoked tinapa such as bangus, kitang, kabasi, samaral, halugasin, and kapak.

Since they are using only fresh fish, they have achieved a level of excellence for the distinct flavor of their tinapa. The banak, which they call kapak has three sizes of small, medium and large. Not more than six inches is the best size for making tinapang banak, which is much appreciated in Bataan. Although kapak sells well in the province, it is not so in Divisoria. The Manila buyers prefer either bangus or halugasin, better known as galunggong or round scad.

The noun-verb tinapa is derived from the root word "tapa", which was cited in old Tagalog vocabulario or diccionario prepared for the early Spanish missionaries. Correlated with these diccionarios are the grammar books like the Arte y Reglas de la Lengua Tagala prepared by the Dominican Fray Francisco Blancas de San Joseph, and was printed by Tomas Pinpin in Bataan in 1610. He briefly noted that the tapa or tinapa is one of the ways of preparing food using fire, together with the other related words like nanag, añgit, laga, labon, saing, sigang, tapa, salab, and yhao.

Another Dominican priest, Fray Miguel Ruiz, has defined tapa more completely in his Bocabulario Tagalog by around 1630. He noted that tapa is "the smoking, steaming, or desiccating by open wood fire something like meat or fish, which are loaded up high in bamboo parilla or grill like roasting pig, or desiccating over low heat of the furnace, that is. by using hot coals and not candles." He added that the pagtapahan is the place where they are making tinapa. Papagtapahin in turn are the people that are nagtitinapa, while the tapahan are the smoking furnace, and tapahin are the fish and meat that are smoked or pinauusukan.

Fussy and laborious is pagtitinapa. The working hours in the tapahan is usually at night, as it is usually in the afternoon that the fish delivery arrives from consignacion in the fish ports or fish ponds. They are washed thoroughly.They must also get rid of the bones and spines of bangus and banak. They are rinsed (banlawan) well, stacked in containers made of bamboo and allowed to drip dry (patuluin ) for almost two hours. Once the qualify fish are selected and put in baskets, they are stacked in a large cauldron full of boiling water with enough salt. The whole process is both old-fashioned and quite interesting as it seems no different from what was detailed by Fray Ruiz in 1630.

After boiling, the fish are carefully removed and placed in a parilyang kawayan . While still hot, they are rinsed with fresh water before they are finally arranged (salansan ) in a large fireplace with a compartment below for burning firewood. The burnt flavor, aroma, and color o the tinapa is due to the dried wood shavings as pampausok. This is continuously monitored to ensure that the fire is not too strong so as not to burn the tinapa bloated. The whole process takes about four to six hours. Once cool, the sweet smelling tinapa are wrapped with fresh banana leaves and old newspaper.